Hints of a new kind of rate review? 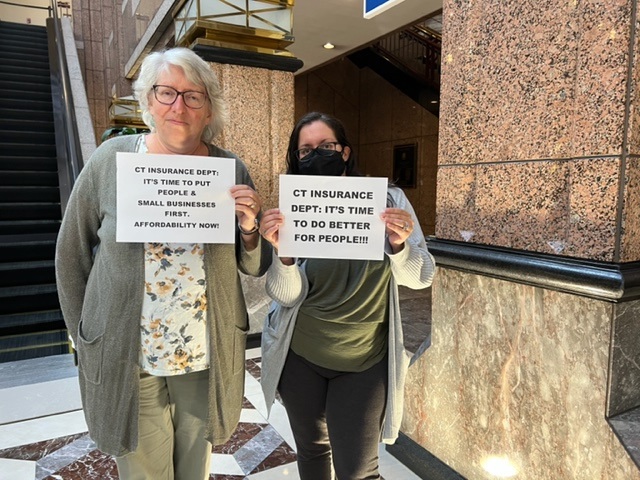 People like me have attended far too many health insurance rate hearings. It has been an annual dance of insurers asking to adjust health plan premiums, actuaries discussing data and trends, and regulators figuring out the “reasonable” premium rates to approve.

The public rarely weighed in at the bureaucratic summer hearings held at the CT Insurance Department (CID). A few advocates and politicians spoke up. And each year, CID told us all that they were not able to consider consumer affordability in reviewing the rate requests.

The whole process was designed to protect insurance industry bottom lines – and completely disregard what individuals and small businesses who buy their own insurance can afford.

This year – in the wake of a pandemic and the stress of inflation – people, politicians and the media were shocked into high alert by the health insurers’ stunning requests for an average 20%+ increase, with some requests for as high as 34%. Enough was enough!

They called for the rate requests to be rolled back or outright denied. They asked for a formal (Uniform Administrative Procedures Act) hearing with the right to cross-examine the insurers.

Universal, once more, called for a public hearing after work hours at an accessible location, so people who buy their own health plans could attend.

Media coverage of the outcry was extensive.

The state insurance regulator, CID, normally says no to requests from advocates – but this year, CID hinted that we may begin to see a new kind of rate review.

They moved the “informational” hearing to a more accessible venue, the Legislative Office Building, where people could park, sit comfortably and easily participate in-person or via Zoom.

The entire hearing was, and is, available to watch online via CT-N.

CID Commissioner, Andrew Mais, opened the hearing with extensive remarks. Notably, he said that CID and the Office of Healthcare Advocate were hosting a forum on October 3 to delve into the issue of affordability. They are inviting insurers, hospital systems, pharmaceutical companies and others.

After the insurers’ presentations and actuarial back and forth, the state’s Attorney General, Healthcare Advocate and Office of Health Strategy were allowed time to question the insurers. This may not seem like much, but it opened the process to much more critical scrutiny.

Unlike previous years, multiple legislators from both parties weighed in with insightful observations, critiques, and requests to change the process of reviewing rate requests. And 3-4 times as many advocates and individuals testified. Most moving were the stories from everyday people who waited hours to call for affordability and accountability.

CID will review the rate requests and issue their decisions in the next month. They can deny requests or adjust requests. We should expect some adjustments from CID.

Despite Universal’s repeated call to consider affordability to the consumer, CID will likely not use the new CT Healthcare Affordability Index (CHAI) tool until legislators pass a law requiring them to do so.

We expect legislators to introduce bills in 2023 that will require changes in the rate review process as the time to do this is way past due.

The August 15 hearing may well signal a new kind of rate review in our future. Thank you to the 250+ people who signed Universal’s insurance rate protest petition. We shared your objections at the hearing.

Resources to check out